If you read something you like here please consider leaving a comment, even if it's just to say hi. It'll make my day.

All of my fics are also archived at AO3. If you'd prefer to read them there, please form an orderly line and proceed thisaway.

Hey, remember me? I know, I know, it's been awhile. I haven't been around much this year because I've been trying to focus on non-fannish stuff, and for the most part I have been. But I've been in a major Leverage nostalgia spiral the last few weeks (which those of you who follow me on Tumblr may have noticed already). So I went back and finished this fanvid that I started shortly after the show ended. It's a tribute not just to the show itself, but also to the cast and crew who made it possible. *sigh* I miss you, show. Why couldn't you go on forever?

leverageland is an interactive community for Leverage fans.

There are four teams: Team Grifter, Team Hacker, Team Hitter, and Team Thief.
Once you apply you will be placed in one of those communities and
you can try with your teammates to earn the most points and win the heist!

Heist 9: The Back to the Future Job will include a variety of time-based challenges --
including games, writing, fanart, puzzles, & team challenges.

Will the Grifters grift the heist?
Can the Hackers brain the game?
Can the Hitters smash the competition?
Will the Thieves steal it, maybe?

It's up to you! We'd love to see you!
Apply here to join a team, and let's go steal us a heist! 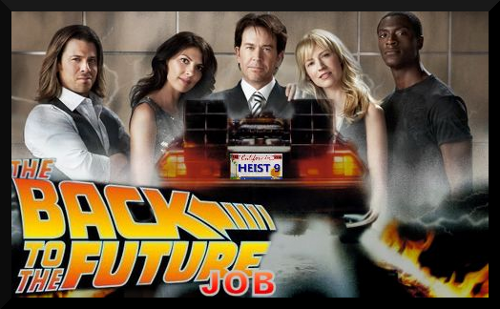 So, you guys know how I posted last month about how I was going to be devoting myself to working on my original novel? Well, I'm happy to say that I have been doing exactly that. I've set myself a goal of 1000 words a day, which I know is not that much to some of you, but it's a lot for me, and seems to be just about right. It's enough that I'm making noticeable progress, but not so much that even on my worst days I can't still sit down and grind it out in a couple of hours.

I haven't really said much online about what the novel is, exactly, (although I've hinted on Twitter that it's in the vein of a Regency romance). Well, the reason for the secrecy is that it's the kind of idea that's timely enough that I've been afraid someone else would come up with it and beat me to the punch, so I didn't want to go spreading it around.

And then this morning I came across this: "Fetch Me My Smelling Salts, There’s a Downton Abbey-Style Pride and Prejudice Movie in the Works"

(I'd link to the Deadline.com article, which has more info, but apparently LJ won't let me link to Deadline? WTF??)

It's not EXACTLY the same as my book, but it's pretty fucking close. VERY fucking close. Mine differs in two major respects, which I think actually makes mine a more interesting premise, if not quite as movie-worthy. But STILL. *sigh*

And it's not like I didn't know that someone else was going to come up with the same idea eventually. I totally did. Frankly, I'm surprised it's taken this long. I started this book in February of 2011, gave up after a few months, and let it sit untouched on my hard drive for almost two years before jumping back into it. And it's only NOW that something similar is finally showing up on the scene? That's kind of amazing, actually.

I'm trying not to be disheartened by it, though. Sure, it's a bit depressing reading the long list of outlets she's sold the rights to and wondering if that could have been me if I'd gotten off my ass and finished my book first. But it's also encouraging that she's met with such mainstream success. I wasn't really sure there would be much of a mainstream market for the thing, and it turns out that there apparently is. And since the publishing industry is so keen to jump on the latest bandwagon (see also: Twilight, Fifty Shades of Grey, and the infinite knockoffs thereupon), this doesn't necessarily mean my idea is useless. I am quite content to be author of a knockoff, if it comes to it.

So I'm still finishing the damn thing, even if it kills me. I had about 25,000 words when I started back on it just before the new year, and I'm past the 60,000-word mark now (see what 1000 words a day will get you!). I'm well over halfway through my first draft at this point, and while it's a VERY rough first draft, this is the hardest part for me--revising has always been a breeze compared to staring down that white blank page. I figure I can have my first draft done in a month, devote another couple months to rewrites, and then it'll be finished.

Jo Baker's book isn't even coming out until fall, and god knows if the movie will ever get off the ground. If I keep my nose to the grindstone I can still have my query letters out before her book hits the shelves. And even if no one wants it because it's too similar (or because it's not good enough) I'll still have done it. I'll have written a whole fucking novel and sent it out into the world. THEN I'll be able to call myself a writer without feeling like a liar. And then I'll just self-publish the thing, because fuck, it's basically fanfic, and I personally know at least two dozen people who'd pay a few bucks to read it, even if it's not great literature.

In which I talk about the Fringe finale:

What's this, you say? She's pimping yet ANOTHER fic opportunity that she can't even bothered to sign up for herself? Yes, yes she is. Deal with it.

I want more Leverage fic in the world, even if I don't have the time to write it right now. So get thee a bingo card and get to work, people.

(And it would be very much appreciated if no one reminded me that I never completed my own bingo card from last round. Oy.) 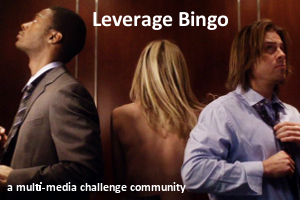 I know what you're saying ... Hey, didn't she just yesterday post about how she wasn't going to be writing any more fic for a while? Yes, yes I did. And I meant it. But that doesn't mean I can't still pimp worthy fic-writing opportunities for others to enjoy. Especially now that Leverage is off the air, we've all got to work extra hard to keep this fandom alive. And while I won't be signing up as a writer, there is a very good chance I may sign up as an artist this time. There are lots of great writers in Leveragedom, but not so many active artists, so this way I can still do my part.

So, um, the Fulcrum Awards for Leverage fanfiction were announced awhile back, and somehow this happened:

I am absolutely floored, you guys. I don't even know what to say, except thank you. Leverage fandom has been so welcoming, so enthusiastic, and just generally wonderful in every way. There aren't really words to express how much I love you guys.

Even though I've been a fan of the show from day one, it wasn't until a little over a year ago that I wrote and posted my first Leverage fic. The response to that fic, and to the ones I've posted since, has been overwhelming, especially for such a small fandom. It's given me a self-confidence in my writing that I never had before, and inspired me to be more prolific and to push through periods of writer's block and crippling doubt in my own abilities.

leverageland primarily in the hope that it would motivate me to write more and write often. And it did. Working against deadlines, spurred by the desire not to let my team down (

teamhitter! Holla!), forced me to exercise discipline and build writing muscles I didn't even know I had. But along the way I did something else, too: I made some amazing, inspiring friends.

I'm not new to making friends via fandom--most of the people who are most important in my life now are people I met because of The West Wing. But it's been a long time since I've been involved enough in a fandom to make new friends. The people I've gotten to know because Leverage have made the last year 1000% better, and I just want to thank all of y'all for being so great and letting me be a part of this fandom.

Because of y'all, I've found the courage to throw myself back into working on one of my original novels, and I'm doing it with more discipline and confidence, and the determination to finish this fucking thing if it kills me. Unfortunately, that means I won't be posting as much fanfiction. Fanfic has always been my crutch, and I need to get used to walking on my own two feet. I can't quite bring myself to quit my land comms, though, so I'll still be around, although I probably won't be nearly as active as I was before. I apologize for that, but I know my

This kind of sounds like a goodbye, but it's not. I'll still be reading LJ and I'll probably even be posting some land comm stuff from time to time (in fact, I think there are a few challenge entries I never posted here, so I'll go back and see if I can find those). I just wanted to take a moment to say thank you. Y'all have no idea how much you've meant to me.

CHARACTERS/PAIRING: Clint/Natasha, Tony/Pepper, Steve/Darcy, Bruce, Thor
SUMMARY: Let’s take the Hulk to Antarctica, she said. It’ll be fun, she said.
RATING: PG-13 (for swears)
AUTHOR'S NOTES: So sorry it's taken me so long to get this last chapter up. It's ridiculous to make you wait so long for this final little bit, but Christmas happened, and relatives, and then I had a brainstorm for another project that totally demanded my attention ... in other words: life. But it's finally done and I did it. Thanks for reading, everyone! Peace out.