CHARACTERS/PAIRING: Parker, Eliot, Hardison
SUMMARY: He’d always been there to take care of them, and no one ever wondered who’d take care of him. Written for

leverageland's Forever Alone Challenge.
RATING: PG
WARNINGS: Aging, chronic illness, MAJOR SADZ
AUTHOR'S NOTES: When I was in high school I met Muhammad Ali. It was over 20 years ago, but even then it broke my heart to see how the Parkinson's had ravaged his body. This story is inspired by that meeting, because—let's face it—given the beatings we've seen him take, Eliot's future isn't very bright. I started out writing one version of this story, and then I decided I wanted to approach it another way so I rewrote it and submitted that one. But I think they work nicely together as Before & After companion pieces, so I'm posting them both here. Leveragelanders will recognize part II, but part I is new to you guys.

There are only six days left to nominate your favorite Leverage fics and authors for the Fulcrum Awards.

A lot of categories are still empty, guys, and time is running out. There's a lot of great talent in this fandom, don't let it go unrecognized. Get thee to nominating!

I know there are several folks on my flist who aren't caught up to the most recent Leverage episodes. What follows is a brief discussion of eps 5x09 and 5x10, but I'm intentionally keeping my comments general and unspoilery. No plot points are revealed below, so you should be safe. (Just don't watch the video, because that will spoil the crap out of you.)

There's been some speculation that one or both of the Leverage summer finale episodes could be a back-door pilot for a spin-off or possible series reboot. Not only am I intrigued by this idea, but the more I think about it, the more sense it starts to make. The tone of both episodes was a deviation from the norm, each in a different way. The Rundown Job had higher stakes, a faster pace, more action, and a darker tone than your average Leverage episode. Meanwhile, the Nate and Sophie we got in The Frame-Up Job were happy, lighthearted, and fun in a bantery Nick and Nora Charles way that was a refreshing change from their usual dynamic. And both episodes boasted an obviously larger budget and higher than usual production values. Dean Devlin said The Rundown Job had more CGI effects than any previous episode, and it definitely showed. Plus, the more I think about Parker's super-hot catsuit and glammed up look (nail polish!), the more it makes me wonder. Combined with the fact that TNT is taking their sweet time announcing whether or not we're getting a season six, and ... well.

Anyway, I couldn't let go of the idea, and I loved The Rundown Job so much--SO MUCH--that I decided to make a fake trailer for a spin-off based on it. So here ya go!

As promised, here's the Eliot vid I've been working on. I've been trying to teach myself Final Cut, which allows a lot finer control than iMovie, and this is the sample vid I made to practice some of the basic techniques.

The song I used is "Demons" by Imagine Dragons, which is so totally perfect for Eliot it had to be done. (I really kind of want to make a Leverage vid for every single song on the Imagine Dragons EP. If only I had that kind of time. *sigh*)

CHARACTERS/PAIRING: Parker/Hardison, Parker/Eliot, ensemble
SUMMARY: A modern-day retelling of Sense and Sensibility via the Leverage characters.
RATING: PG
WARNINGS: Bad breakups, near-death illnesses, and not everyone's a hero. It's not my fault, Jane Austen (and

mizzy2k) made me do it.
AUTHOR'S NOTES: Written for

leverageland's Pros & Cons Challenge. For another part of the challenge, everyone was asked to pick one of the fics and made a movie-style poster for it. With kind permission of the artists, I've included the posters that were made for this fic at the end.

CHARACTERS/PAIRING: Eliot, Parker
SUMMARY: Eliot resisted the urge to get involved, despite the fact that the expression on the woman’s face reminded him of a cornered animal.
RATING: R
WARNINGS: Creepy guys in bars, swears
AUTHOR'S NOTES: Written for

leverageland's Flashback Challenge. Thank you to

Do you have what it takes to be a member of Team Hero, Sidekick, Villain, or Civillian, and lead your team to victory? Do you like graphics, fanfiction, and puzzles?

A land comm for Marvel's The Avengers movie on LiveJournal.

READ THE FAQ | APPLY FOR A TEAM

Seriously, guys, I can't recommend this comm enough. It's a friendly, great group of people, the challenges are tons of fun, and it doesn't really take up that much time. Plus, you get to hang out with lots of cool peeps who love The Avengers as much as you do. It's win-win-win! The next mission starts tomorrow, but you don't have to be signed up by then if you want to take some time to think about it. I'm on Team Sidekicks and we're awesome. Come play with us! 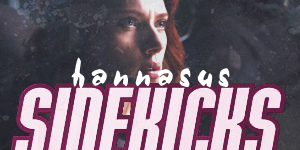 And speaking of, I forgot to post my banners from the last mission (which Team Sidekicks totally rocked).

I finished this a while back and am only now getting around to uploading and posting it because I am lazy. (Note: footage is from seasons 1-4, but there's nothing particularly spoilery, and I didn't include anything at all from S5.)

I've been working on a new, Eliot-centric vid that's close to being finished, so I should have another one to post soon!

First of all, if you watch Leverage and you're not reading showrunner John Rogers' Q&A posts on his blog Kung Fu Monkey, you're seriously missing out. Even if you don't watch Leverage, if you're at all interested in the process of writing and producing for television, it's fascinating stuff.

So. In his latest post he hints at some stuff to come this season and I'm just going to need to squee about it for a minute.

DISCLAIMER: I don't consider information the writer of a show chooses to share about upcoming episodes in order tease/tantalize fans to be a spoiler. As far as I'm concerned, a spoiler is something actually spoils something that's intended to be a surprise, not just any random snippet of information about future episodes. So the things I'm about to discuss are not spoilers, to my mind. If, however, your definition of spoiler is broader than mine, you might want to avoid peeking behind the cut.